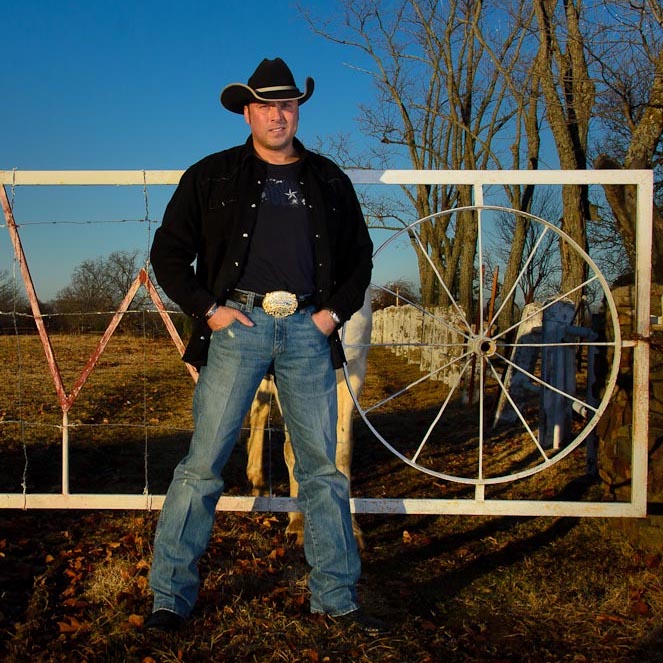 “There’s a thousand little towns you ain’t never heard about out in the Heartland” is the opening line to one of Heath Wright’s favorite songs. And why not? Because right in the middle of small-town, heartland America sits Vian, Oklahoma. If you have ever imagined what life was like in the country, with horses, cows, barbed-wire fences and blackberry bushes; and the owner of the general store knows everyone by name (and whether you were in church or jail last Sunday morning) well, this is the place. Heath Wright has always called Vian, Oklahoma “home” (even during the 15-year period that he lived in Nashville, TN) where he still has life-long friends and lives at the same ranch on which he grew up, the Rockin’ W. It was on this ranch that Heath (as he describes it) had his first real audience to sing to—a herd of Hereford cows that he and his dad raised for beef and Heath’s college fund. According to Heath, “I was painfully shy as a child and couldn’t stand the thought of singing to an audience of real people just yet.”

As the story goes, Heath had a guitar given to him when he was five, but like the typical little boy, he got frustrated when he couldn’t figure it out and “shoved it under the bed.” It was on his 9th birthday that Heath received his first guitar lesson. At that point, Heath was hooked for life. Though he was playing in a band by age 11, Heath was still painfully shy, only playing the guitar parts and seldom stepping up to the microphone to sing a song. Family and friends would beg him to play and sing. But even with the coaxing, it was difficult to overcome the shyness. Only when Heath got to “a certain age” did he lose this shyness. As he puts it, “when I realized it was a good way to impress the girls, well, I guess I was cured of it!” Heath performed in the High School band as well as a few local bands during his youth, yet it was Ricochet that was to be his first and biggest musical accomplishment in life. After High School, Heath attended Northeastern State University where he received a Bachelor’s degree in Business Management. He then went out on the road with a few regional bands but soon realized that he wanted to expand his musical training. So Heath enrolled in a college with a unique type of degree program—a Country Music degree!! Heath attended South Plains College in Levelland, Texas earning his Commercial Music Degree and graduating on May 15, 1993.

The day after graduation he packed his dad’s old 1982 GMC truck and left for home. A short stop off at the Rockin’ W Ranch to give his love to his family and friends was on the agenda before he set out on the most important road trip of his life. It was finally time for him to make the move that he’d always dreamed of—the move to Nashville, Tennessee. Heath headed towards Nashville after those few short days to play an awaiting gig with the band Lariat. It was only a matter of months before circumstances disbanded Lariat and reshaped them into Heath’s dream band, Ricochet, with original Lariat members and brothers Jeff and Junior Bryant and new members Greg Cook (Heath’s childhood friend from Vian), Eddie Kilgallon, and Teddy Carr. It was Ricochet that would take Heath on the biggest musical journey of his life thus far. Heath brought to Ricochet his vocal, instrumental and bandleader skills, garnering some of the highest recognitions in the music industry. They quickly blazed trails in the mid-1990’s earning the New Vocal Group of the Year award from the Academy of Country Music and several other CMA and ACM nominations. Top 10 hits (and even a multi-week #1) on the Billboard charts were no stranger to Heath and his band, Ricochet.

During their highest point, Heath and Ricochet made numerous television appearances on Country Music Awards shows (as performers, presenters and nominees), the Grand Ole Opry, and The Tonight Show with Jay Leno. Heath has become involved in what he says would have been his other career path had he not chosen music (being a rodeo cowboy) by becoming a board member of the Old Fort Days Rodeo Committee in Fort Smith, Arkansas. He often attends and plays at these types of events whenever possible. Heath has received many accolades over the years including having a wing of the Creative Arts Building at South Plains College named in his honor (“The Heath Wright Rehearsal Center”.)

In October of 2011, Heath received an offer he simply couldn’t refuse, to sing lead vocals for one of his favorite all-time bands, Restless Heart. Knowing their music word for word and note for note must have looked good for the resume. As Heath says, “when they asked me to fill in for Larry, I said ‘Hell yes, I’ve only been practicing for this gig for 25 years now!’” Heath has found it not only an honor, but a privilege to fill in as lead vocalist for Restless Heart, as he has become the “lead vocalist on call” whenever Larry Stewart has a prior commitment.

Still, with billboard chart toppers, CMA and ACM nominations, and his travels around the world; Heath says his biggest and best accomplishment is his 9-year-old son, Dustin Heath. Being able to share the experience of raising the small herd of cattle with Dustin that Heath’s father left him along with life on the Rockin’ W is a priceless experience for the two. While performing with Ricochet and (occasionally) Restless Heart keeps Heath’s schedule filled with travel for about 25-30 shows a year, Heath has also decided that he misses the days of performing older, classic-style country music. So he has put together a local band that he calls “Heath Wright & the Hangmen”. The regional band is gaining a following all over Eastern Oklahoma and Western Arkansas. Heath hopes to branch out to other regional markets with this new band. But in the meantime, Heath sings “there’s a “Place in Oklahoma that’ll always take me back!”